COVID-19 Update: How We Are Serving and Protecting Our Clients
Home
Attorney Profiles
Irving M. Friedman 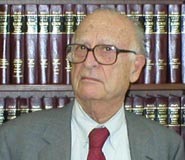 Irving M. Friedman fought for a half-century for economic justice on behalf of working families. Like Harold Katz, Irving was a practicing labor relations and employment law attorney at the firm which he founded with him in 1953. Irving and Harold met when they were opposing each other as counsel in a labor relations case back in the early 1950’s. Irving was then a senior trial attorney for the National Labor Relations Board. It didn’t take long for their mutual respect gained during this trial to turn into a working arrangement that translated into an enduring partnership. He said it worked well because he and Harold jointly shared an interest in speaking on behalf of working people. After facing off against Mr. Friedman in a case involving the United Auto Workers, Harold Katz remarked, "I thought that he was a very worthy adversary, so ... I invited him to become my law partner.”

Irving was a native of New York City who made his way to Chicago to work for the National Labor Relations Board. Mr. Friedman was the son of immigrants from Poland who were both garment workers in New York. Mr. Friedman met Abigail Levin and while Mr. Friedman was still at NYU, the two courted while she interned at the New York offices of her father's union. He graduated with a degree in liberal arts from City College of New York received his law degree from New York University Law School in 1947, influenced in the choice of his career by his wife's father, who headed the Chicago local of the Amalgamated Clothing Workers. Irving had a passion for representing unions in manufacturing, maritime, long-shoring, education, communications, airlines and government. He was a frequent lecturer and writer on Labor Law issues. He was inducted into the Hall of Honor of the Illinois Labor History Society, and was inducted as a Fellow in the College of Labor and Employment Attorneys. As one of the lead counsel in a class action discrimination case, Irving helped the plaintiffs win what was at that time the largest such settlement in the history of the Equal Employment Opportunity Commission. He was a former Labor Member on the Board of Review at the Illinois Department of Labor and was a member of the Governor’s Commission on Labor Laws that helped to develop IELRA and ILRA. He was a former chairman of the Labor Law Committee of the Chicago Bar Association.

Mr. Friedman was involved in landmark labor litigation throughout his career. In the early 1960’s, Mr. Friedman helped a group of cab drivers overcome domination by organized crime. Police were even ordered to guard his family's Hyde Park home during union elections, which the reform group. According to Harold Katz, "he took on Joey Glimco, who was reputed to have some ties to unsavory elements, and never backed off in spite of their efforts to intimidate him. He took the racketeering elements on when no one was fighting them." In that period, Messrs. Friedman’s and Katz's law firm also fought white supremacists in Memphis who wanted to form a separate United Auto Workers union hall for whites. They went before the NLRB to ensure an integrated union.

Mr. Friedman also helped members of the United Auto Workers and the Farm Equipment Workers wrest control of their unions from far-left and communist leadership. In what at the time was the largest settlement of a civil rights claim, Mr. Friedman helped female employees of AT&T and Western Electric win the right to retain their seniority if they took a leave for pregnancy. In the 1990’s, Irving worked with employees of Caterpillar, Inc. during a 6 1/2-year strike, which one of the longest in U.S. history. The strike generated more than 440 complaints against the company by the NLRB, which was a record number. Mr. Friedman also was active in the application of the Americans with Disabilities Act.

Irving was very respected by fellow members of the labor bar in Chicago, so much so that at his funeral a large number of senior partners of the large Chicago management firms came to pay their respects. Despite the heated controversies he often became embroiled in, Mr. Friedman was a true gentleman who always represented his clients with the utmost class. It is sad that Irving Friedman never learned that the firm which he co-founded and mentored along with his law partner of 50 years, Harold Katz, was honored after his passing by the respected publication U.S. News & World Report as 2013’s Best Law Firm in the U.S., Labor Law – Union and soon thereafter for Workers Compensation.