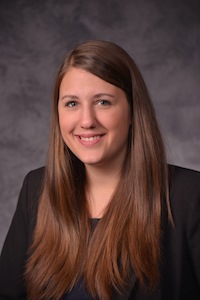 Bridgette A. Kolb joined Katz Friedman in 2014. Her practice is focused on protecting the rights of workers in Workers’ Compensation, Labor, and Employment law.

Bridgette represents clients in Workers’ Compensation and Occupational Disease cases. She is a zealous advocate who is dedicated to obtaining the compensation that injured workers and their families deserve. Bridgette has successfully represented clients with a wide variety of injuries, including injuries to the back, neck, head, limbs, and shoulders as well as burns, infections, and significant injuries to eyes.

Bridgette has represented numerous injured workers in the airline industry, including flight attendants and pilots based all over the world, baggage handlers, and customer services representatives, in their workers’ compensation and occupational disease claims. She has investigated and prosecuted claims against United Continental Holdings, American Airlines, Southwest Airlines, Delta, ExpressJet, Frontier, SkyWest, Republic Airways, and other airlines.

Bridgette has represented many injured nurses in claims against Northshore, Presence Health, the University of Illinois hospital system, as well as other hospitals and nursing homes.  She has also successfully pursued claims against Ford Motor Company, PepsiCo, DHL, Sysco Foods, Hyatt, and other employers throughout Illinois.

Bridgette represents the Firm’s labor union clients as well as individual employees in employment matters.  She represents workers who have been the victim of unlawful employment practices by their employers.  She has represented employees under the Family and Medical Leave Act (“FMLA”), Age Discrimination in Employment Act (“ADEA”), the Fair Labor Standards Act (“FLSA”), the Illinois Wage Payment and Collections Act, and in discrimination claims based on Gender, Race, Pregnancy, and Sexual Orientation as well as sexual harassment claims under Title VII and the Illinois Human Rights Act.

Bridgette has also assisted in research and drafting various other Workers’ Compensation, Labor, and Employment law articles and publications.  She has aided in the drafting of IICLE Continuing Legal Education topics covering a variety of topics, including assessing Permanent Partial Disability, settlement contracts guidance and pitfalls, and the impact of social media on workers’ compensation claims.

Bridgette aided with the appeal in Steven Dunteman v. Illinois Workers’ Compensation Commission. In that case, Caterpillar refused to pay benefits to an injured employee, arguing that the employee was not entitled to benefits because his own self-treatment had worsened his condition. The Illinois Appellate Court found in favor of the employee, establishing that Illinois workers are entitled to workers’ compensation benefits even if self-treatment causes the injury to worsen in severity as long as the injury is work related.

Bridgette received her Juris Doctor degree from Chicago-Kent College of Law with a certificate in Labor Employment Law. While in law school, she was an active member of the Labor Employment Law Society. She had the opportunity to participate in the Peggy Browning National Workers’ Rights Conference as a student leader in 2014. While in law school, Bridgette was also an active member in the Society of Women in Law.

Before attending law school, she graduated from the University of Illinois at Champaign-Urbana as a James Scholar, earning a Bachelor of Science degree in Psychology and a Bachelor of Arts in Communication.

Bridgette is originally from the Detroit suburbs. In her free time, Bridgette volunteers at events for children and adults with disabilities in the community and tutors local elementary students. She enjoys cooking, exploring Chicago, and spending time with family and friends.

B.S. in Psychology and B.A. in Communication, University of Illinois at Champaign-Urbana