COVID-19 Update: How We Are Serving and Protecting Our Clients
Home
Attorney Profiles
Abdu-Raheem “A-R” Igbadume 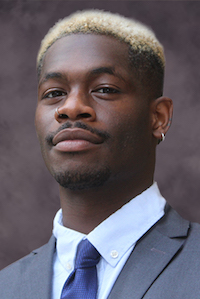 A-R represents clients in Workers’ Compensation and Occupational Disease cases. He is a zealous advocate who is dedicated to obtaining the compensation that injured workers and their families deserve. A-R has successfully represented clients with a wide variety of injuries, including injuries to the back, neck, head, limbs, and shoulders as well as burns, infections, significant injuries to eyes, and sicknesses related to the contract of the COVID-19 virus. A-R practices in State and Federal courts throughout the state of Illinois. He has successfully representing clients against employers including but not limited to Amazon, UPS, City of Chicago Department of Streets and Sanitation, Chicago Public Schools, The Dow Chemical Co., McDonald’s, and Hostess.

A-R received his Juris Doctor degree from Loyola New Orleans College of Law. While in law school, he was an active member of the Black Law Students Association and served as both the Treasurer and Historian. A-R was a law clerk for a local personal injury firm in New Orleans and assisted in the management of a class action tort claim involving birth defects and cancer for over 400 claimants. Here he worked closely with the affected clients, the families of the decedents, as well as a licensed toxicologist.

Before attending law school, he graduated from the Kennesaw State University, earning a Bachelor of Science degree in Political Science. During his time at Kennesaw State, A-R was able to work in the Georgia State Capitol both as legislative intern, and later as a lobbyist. He frequently dealt with state senators, representatives, and their respective constituents. As a legislative intern, he maintained closed professional relationships with some of the most important individuals in state and local government. While working as a lobbyist, A-R was able to gain unique firsthand experience in advocating for his clients through support or opposition at committee hearings discussing particular legislation. A-R was awarded the Political Science & International Affairs Outstanding Alumni Award by Kennesaw State University and was nominated for the Outstanding Student Award by the Department of Political Science & International Affairs. He served as one of Kennesaw State’s Political Science Ambassadors and was a member of the Nigerian Students Association.

A-R is a member of the Illinois Bar and is admitted to practice before the Supreme Court of Illinois and the United States District Courts for the Northern and Central Districts of Illinois. He is an active member of the Workers’ Compensation Law Association and Chicago Bar Association.

A-R is originally from Atlanta, Georgia. In his free time, he volunteers at an assisted living facility for disabled/elderly patients and helps manage a group home for disadvantaged or disabled youth. He enjoys photography, watching soccer, and spending time with family and friends.

NOTABLE APPELLATE COURT DECISIONS
Country Mutual Insurance Company v. Under Construction and Remodeling, Inc., 2021 IL App (1st) 6061771
Employee was allegedly injured while working for his employer and filed a workers' compensation claim. Plaintiff, the employer's workers' compensation insurer, contacted employer for information about the claim, but employer failed to respond. Insurer filed declaratory judgment action, claiming that it owed no duty to defend or indemnify employer because it had breached the policy's cooperation clause. Record does not show as a matter of law that Plaintiff exercised reasonable diligence in seeking employer's participation or that employer willfully refused to participate in investigation. Plaintiff did nothing to discover alternative methods of contacting employer, and its rote efforts to reach employer were not sufficient to show Plaintiff's diligence or that employer willfully refused to cooperate.
Contact Us
Practice Areas